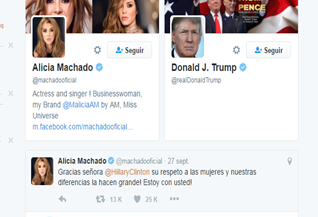 It is unacceptable that a candidate for president of a country like the US can issue a tweet enjoining the community to see an alleged sex video of a woman in this case of Alicia Machado. Funky sounds that a person who wants to lose such an important position decorum to catch up with a gossip loudmouth. But decorum has had Alicia Machado certainly no right to prosecute and try to demoralize a woman who represents a nation and more to a community like America, not to mention also that their insults and disgusting attitude affects not only her but also her family. Mr Trump is true PIG you to get to argue with a woman when he should be concerned about the fate of their country. His “proposals” and statements against Mexicans and immigrants in general make it look like a detestable person who attacks such a working community as Mexican and Latino general who has served his country for so long, threatening to separating them from their families not caring such basic rights as the right of a family to be together. United States does not deserve a person like you to govern them, would be a terrible fate for the American people be under the command of a person. They are 55 million Latinos living in the United States making it in another country within his. Propose a wall on the border with Mexico financed by remittances that Mexicans sent by their families is simply a proposal as disgusting as you. Leave women alone, does not fit to fight with them and Alicia, you never have stopped being a queen and Mr Trump will not reach the ankles, Forward Alicia!